We left for Michigan from Dallas a few weeks ago. This is the first time we’ve been in Michigan since we’ve both been vegan, so I was pretty nervous. Turns out, it was extremely easy and there were tons of delicious options for us.

At the Dallas / Fort Worth Airport we were running short on time for breakfast and options were scarce near our terminal so we stopped at a Blimpie. We both got a sub with all the veggies and mustard on white italian bread.

We landed in Michigan a few hours later. Our first stop was at Tim Horton’s. I’m from Buffalo, NY so we used to get our coffee from Tim Horton’s, not Starbucks. I got a plain pretzel bagel and some coffee.

That night we met up with some family and ate at the Blaze Pizza in Auburn Hills for dinner since it was close to the hotel. There’s one about 40 minutes from where we live in Texas and we’ve only been there once, but we really enjoyed it and hoped the family we were with would too. We ordered a vegan pizza to split between DJ and I and a side salad (I love the build your own salad option Blaze offers!). We topped the pizza with vegan cheese, spinach, tomatoes, and onions. This is a terrible sneaky picture of our food because I was super embarrassed taking photos of my food in front of people I didn’t know yet. 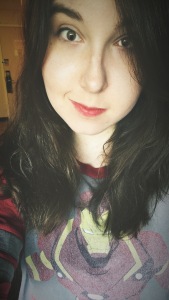 We came here for a wedding, so I figured I would also show the makeup I used. Everything is cruelty free from the brand Wet N’ Wild. It is super affordable makeup that I think looks really nice. I used the photofocus foundation in shell ivory, the coloricon blush in mellow wine (that broke in my suitcase on the way back home), the megaglo highlighter in “When the nude strikes”, their black eyeliner pencil, and their retractable brow pencil in ash brown. I never wear lipstick so I forgot to include it in the picture (it was still in my bag from the wedding) but that was also from Wet N’ Wild in the shade Wine Room.

We had a bit of food at the wedding (lots of beans, veggies, and potatoes) and that night we drove 3 1/2 hours east to Beulah, MI. We stopped at a Wendy’s for dinner and I ate some fries and the Apple Pecan Chicken Salad (without the chicken, pecans, and the bleu cheese).

The wedding venue was really neat, there was a small room under the pond outside that made for some cool photos. 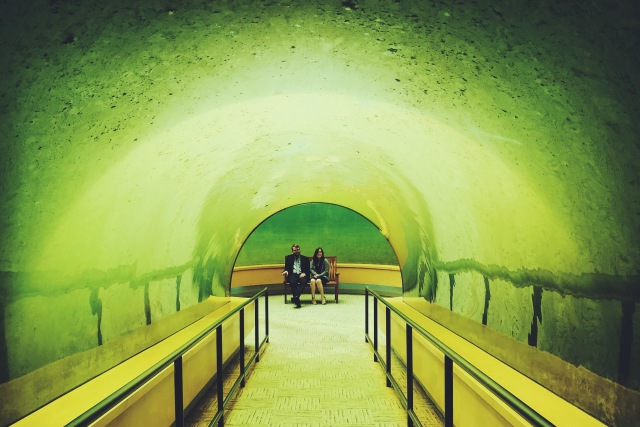 Oatmeal for breakfast:
Instant oatmeal has been a lifesaver for when we go away. Hotel buffet breakfasts don’t usually have much we can eat, if anything at all, so we always go to the closest grocery store (usually a Walmart) on our first day and pick up prepackaged oatmeal and Lenny and Larry’s cookies. Hotels will always have hot water near the coffee in the lobby, so adding it to a bowl and mixing it with some oatmeal and bananas or other fruit is such a quick and easy breakfast. Lenny and Larry’s cookies are also a good snack to have on hand because they are so filling.

For lunch we stopped by a restaurant in the city of Empire called Joe’s Friendly Tavern. They had a plant-based burger, and we were told the buns are vegan. This was another sneaky shot out of embarrassment of photographing my food. 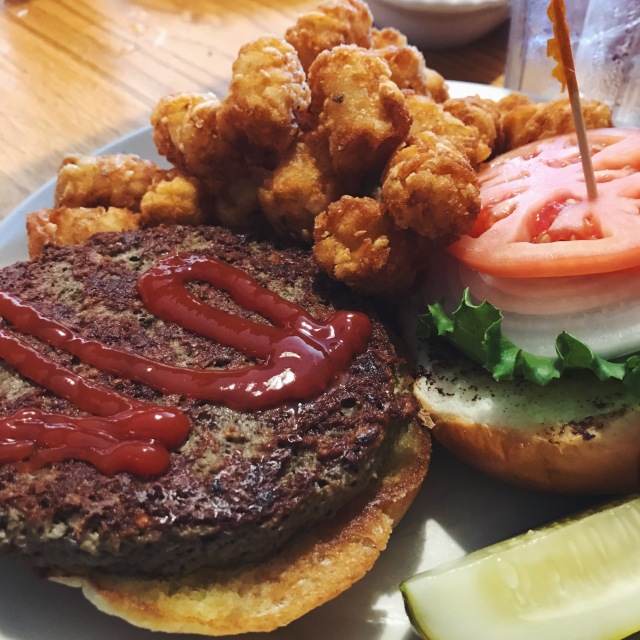 For breakfast DJ and I ate at the Crescent Bakery and Cafe in Frankfort. The Vegan Panini and the Veganlicious were so good! There were tons of options here and they even had oatmeal raisin cookies too. 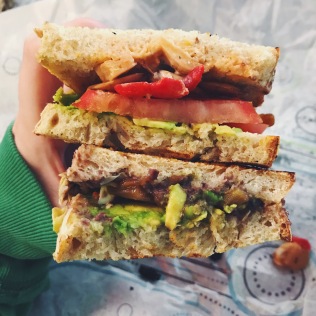 We wanted to stay in Frankfort for dinner and found the Stormcloud Brewing Company. They have flatbread pizzas that can be made vegan, the pretzel bites are vegan (the cheese it comes with obviously is not), and some delicious hummus with veggies. We split the Caprese flatbread with vegan cheese but without the pesto (the pesto is not vegan) and the hummus and veggies. 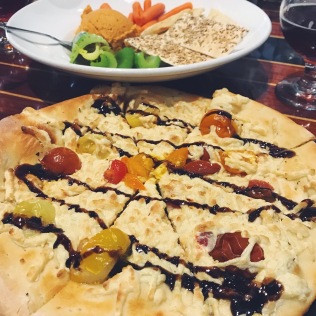 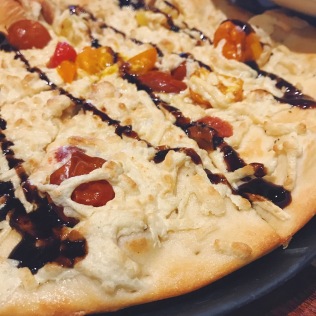 We had a long travel day ahead of us, from Traverse City to Detroit then finally home. We had a three hour layover in the Detroit airport so we had a nice dinner at Mezza Mediterranean Grille. We highly recommend eating here if you’re at the airport, especially if you’re stuck there like we were. The vegan options are clearly marked and the staff was extremely nice. We split the Mezza starter which includes hummus, baba ghannooj, and tabbouli, and we both ordered a falafel wrap. We can’t recommend this enough, it was so tasty.

Those are some of our highlights from our short time in Michigan. We’re going back in September for another wedding so there will be a part two coming soon. We didn’t think there would be so many options, and there are many more places we want to try when we go back. 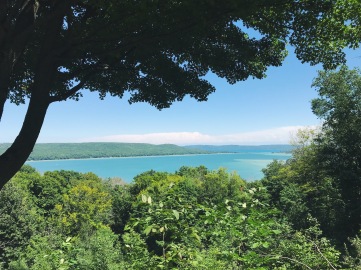 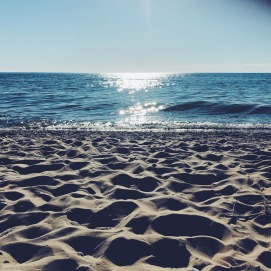