I woke up early this morning to a foggy, cold, wintry morning. It was a nice change compared to the hot November we’ve had so far.

Lately I’ve been starting out my day with a small green smoothie. I’ll drink one before I eat breakfast just to add in more fruits and veggies to my diet. Yesterday’s was absolutely delicious! Just 2 large handfuls of spinach, cashew milk, one banana, and about one cup of frozen strawberries. I used the last of the strawberries yesterday, so today’s smoothie consisted of spinach, cashew milk, a banana, and frozen peaches. It was naturally sweet and refreshing.

For breakfast we made breakfast tacos! I made these on my last day off and they were a success, so I wanted to make them again for a fancy breakfast. The filling is just tofu that I scrambled in a pan, green peppers, red peppers, onions, potatoes, and spiced with garlic powder, nutritional yeast, black pepper, turmeric, cumin, and thyme. I would normally add spinach but I used the last of it in my smoothie. Finally, to make the mixture “cheesy”, I added in a few spoonfuls of hummus when everything was done cooking. This also helped the filling stay in the taco shells: 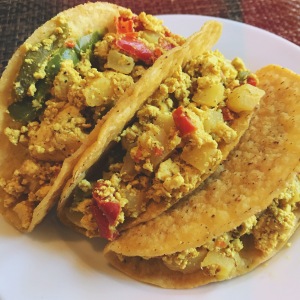 I never made sushi before and I wanted to give it a try, so that’s what I decided to make for a late lunch/early dinner. These were just simple cucumber and avocado rolls topped with sesame seeds. I had two rolls, the first one completely fell apart but the second try turned out pretty well. I didn’t use a bamboo mat and forgot to buy rice vinegar, but rolling it by hand and using a little bit of apple cider vinegar turned out alright (the apple cider taste was strong, but I don’t mind apple cider vinegar. I’m definitely buying rice vinegar for next time though): 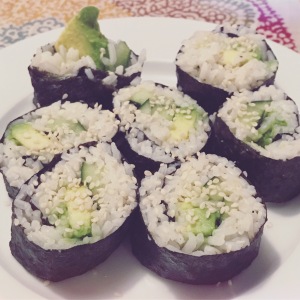 Finally for a snack I had the leftover pumpkin bread from my last post:

This is everything I ate today. Tomorrow we are going to have some friends over and hopefully recreate Macaroni Grill’s macaroni and cheese. If all goes well expect a blog post about it soon!